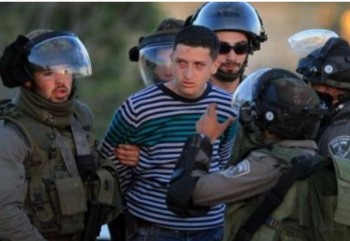 Israeli soldiers kidnapped, late at night and on Sunday at dawn, at least eleven Palestinians, including children and a journalist, in different parts of the occupied West Bank, and summoned many for interrogation in a number of military centers. The soldiers also invaded and bulldozed farmlands, in Gaza.

The soldiers also invaded the home of Taleb Hamed, looking for his son, Tareq, 19, but he was not at home; he is a student of Birzeit University.

A university student, identified as Bahaeddin Sheja’eyya, 19, was kidnapped after the soldiers invaded his home in Deir Jarir town, east of Ramallah.

The soldiers also invaded Zawiya town, in the central West Bank district of Salfit, and kidnapped one Palestinian, identified as Monir Shaqqoura.

In the southern West Bank district of Hebron, the soldiers kidnapped Tamer Waleed Ghazi, 17, from the al-‘Arroub refugee camp, Monir Nasser Shadeed, 20, from Doura town, and Husam al-Misk, a student of the Al-Quds – Abu Dis University.

The soldiers also summoned for interrogation the head of Palestine Detainees’ Center Osama Shahin, and Jaber Rajoub, from Doura, in addition to a former political prisoner, identified as Zeid Abu Fannar, in Yatta town.

In occupied Jerusalem, the soldiers kidnapped a child, identified as Mohammad Ishaq Taha, 15, from his home in Qotna town.

Another Palestinian, who remained unidentified until the time of this report, was kidnapped from his home in Rafat town, north of Jerusalem.

The soldiers also kidnapped Palestinian journalist, identified as Samah Dweik, 25, after invading her home in Ras al-‘Amoud neighborhood in Silwan town, in Jerusalem, and confiscated her computer and other equipment.

It is worth mentioning that Samah, a reporter with Quds News Network, is “blacklisted” by Israel, and has been denied access to the Al-Aqsa Mosque, in Jerusalem, for the past several homes.

In addition, several Israeli military vehicles and bulldozers invaded Palestinian agricultural lands, close to the border fence near the Sheja’eyya neighborhood, east of Gaza city, before uprooting them. The soldiers also fired a number of rounds of live ammunition.

The Israeli vehicles also invaded lands in the Nahda neighborhood, in Rafah, in the southern part of the Gaza Strip; the invasion in the fifth in the last five days.