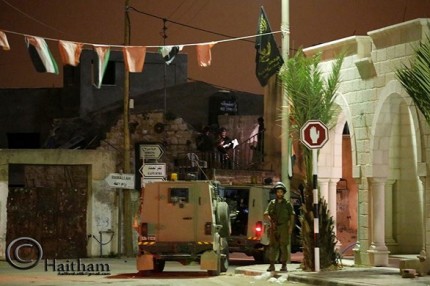 Haitham Khatib, a nonviolent Palestinian activist and a cameraman from Bil’in, said many Israeli army vehicles invaded the village, and fired more than 30 tear gas bombs in various neighborhoods.

This is an act of terrorism,” Khatib said, “The soldiers invaded the village and drove around, before firing at least thirty gas bombs, leaving trails of smoke everywhere.”

Bil’in is a leading village in the popular, consistent and well-organized struggle against the Israeli Annexation Wall, the colonies and the occupation in general in Palestine. It’s nonviolent resistance is carried out alongside extensive participation of Israeli and international peace activists.

It lost many of its popular nonviolent figures, and residents, who were killed by the Israeli army, while the soldiers continuously invade the village, in addition to kidnapping and detaining many activists in an attempt to suppress this ongoing struggle.