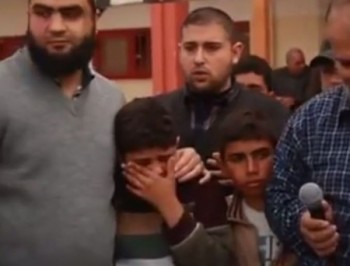 Various Palestinian factions in occupied Palestine issued statements strongly denouncing a recent video that surfaced on social media outlets, showing Hamas members in a school yard, lining up students to “get them to repent their sins,” or wrong doings. Hamas officials defended the move as a “legitimate act to preserve values.”

The leftist Popular Front for the Liberation of Palestine (PFLP) expressed its deep shock of the horrific scenes in the released video, showing children in a schoolyard crying in what Hamas calls “repentance.”

The people conducting the so-called “repentance” acts, in the Nile School in the Gaza Strip, are from a group run by the Hamas-controlled Ministry of Waqf and Religious Affairs in the coastal region.

The PFLP said the video shows shocking scenes, inhumane psychological pressures, violating every right of those children, by subjecting them to humiliating conditions and social pressures.

It also called on the Ministry of Education to initiate a serious investigation into the issue, and said that the children, the students, should not be subjected to any programs that would just “fill their heads with takfirist and extreme ideologies.”

“Gaza does not need such idiotic and malignant programs that shut down any prospects of hops and future for the children,” the PFLP said in its statement, “Gaza needs enlightened, national and positive programs to strengthen the Palestinian identity through beneficial and noble programs that invest in the children’s creativity.”

The leftist Palestinian People Party (PPP) also denounced the Hamas conducts in Gaza schools, and the “outrageous violation and humiliation of the children, and their rights,” in different schools in the coastal region.

It said that those members of the alleged “repentance committee” went to many schools for boys in the Gaza Strip, and held more than forty sessions in these educational facilities for what Hamas officials called “removing the devil from the hearts of the children, and correct their behaviors.”

Palestinian intellectual, author and leftist leader, Abdul-Majid Hamdan, said that “terrifying the children in this manner is a blatant violation of their childhood.”

“What type of sins did those children commit to be treated in this humiliating manner,” Hamdan said, “Or maybe it is a declaration of the failures of Hamas and its allies in running the Gaza Strip. What are they worried about to be conducting these outrageous violations? Such acts are just meant to terrorize the children instead of enlightening them and urging them to seek the needed knowledge and education.”

Many other factions, political and social figures, in addition to a large number of activists in Palestine also expressed their outrage after seeing the video, and demanded Hamas in Gaza to stop these acts, and to allow the children to grow up, and receive the needed education, far away from intimation and fear. the Hamas movement considered the events as part of the “ordinary conducts of the Ministry of Waqf and Religious Affairs,” in Gaza.

Hamas media spokesperson, Sami Abu Zohri, said the movement “stresses on the important role the ministries of Education and Waqf play in boosting Islamic and moral values that correspond with the Islamic and national customs and traditions.”

Abu Zohri added that Hamas also called on related departments to consider all the comments and notes made by various Palestinians and organization, in order to “take them into consideration in future events.”

By the time of this video, the “repentance committee” has already toured forty schools in the coastal region, and is preparing to head to more schools.