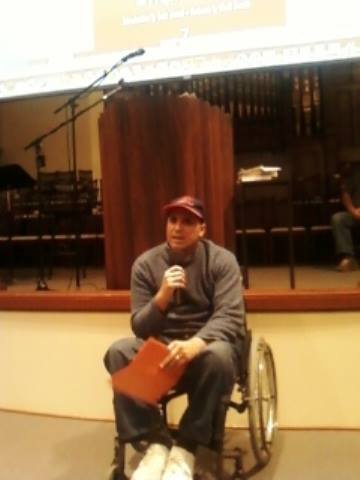 In its yearly publication of “The Top 25 Most Censored Stories”, the California-based organization Project Censored featured an article by IMEMC’s Saed Bannoura entitled “US military re-supplying Israel with ammunition through Greece”, published January 8, 2009.

Saed Bannoura was subsequently featured as a speaker on Project Censored’s tour in the northwest US on Saturday, November 7th.

In the November 7th event, the IMEMC’s Editor-in-Chief Saed Bannoura spoke about the content of his article that was featured in the book, which involved US military contracts and shipping documents revealing that the US government was re-supplying the Israeli military with weapons and ammunition in the middle of Israel’s 3-week long assault on the Gaza Strip in January.

The re-supplying mission came at the same time as a US Congressional vote on a bill assuring Israel full support for its attack on the Gaza Strip – even as reports came streaming out of Gaza of the massive civilian casualties, use of banned weapons, and attacks on civilian infrastructure by the Israeli military. [full article reprinted below]

Saed Bannoura’s January 8th article was part of this year’s publication of the year’s most censored stories – stories that the mainstream US media refused to cover. The article was listed as a source for ‘Censored Story #9: US Arms Used for War Crimes in Gaza’, which also cited a report by Human Rights Watch about the use of U.S.-supplied white phosphorus against the civilian population of Gaza.

That report, entitled “Rain of Fire: Israel’s Unlawful Use of White Phosphorus in Gaza”, detailed how the Israeli military used white phosphorus not as an obscurant (its only allowed use under international law), but as a weapon fired directly into Palestinian civilian areas, including refugee camps and UN-run shelters.

In an event in Portland, Oregon on November 7th, the editors of ‘Censored 2010: The Top 25 Stories of 2008-2009’, Peter Phillips and Mickey Huff, along with Saed Bannoura, spoke about the crisis of truth in the US media, where journalism has become a form of entertainment, and corporate conglomerates own the vast majority of all media outlets.

While Saed Bannoura spoke specifically about the US media’s lack of coverage of the Israeli occupation, Phillips and Huff addressed the wider issue of editorial censorship, conflicts of interest among corporate journalists, and the focus of so-called ‘news’ organizations on issues of celebrity gossip and other trivia, while omitting issues of real substance.

As the Israeli military continues to pound the crowded, impoverished and imprisoned population of the Gaza Strip with the full force of its military might, Israel’s strongest ally, the United States, announced plans to ship large amounts of ammunition to the Israeli forces – as it did during Israel’s 2006 invasion of Lebanon, when the Israelis ran out of (internationally-banned) cluster bombs, and the US shipped them tens of thousands more.

The US Military Sealift Command, on December 31st, published a solicitation for bids from shipping companies to ship two boats, each containing 168 TEU’s (twenty-foot equivalent container units) of ammunition, from Greece to Israel.

The description of the vessels required was brief:

Bids were requested by January 5th, but it is unclear whether bids were submitted or if a contract was awarded by January 8th.

According to the US Military’s solicitation, ‘Funds are not currently available for this procurement. In the event funds remain unavailable, this procurement will be cancelled without an award being made.’

Over one million cluster bomblets were dropped in southern Lebanon, largely due to the US ’emergency’ shipment.

Many of those bomblets remain on the ground in Lebanon, unexploded two years later. They continue to kill and maim Lebanese civilians, mainly children and farmers, who come across the unexploded bomblets and step on them or pick them up.

According to Wired magazine’s security correspondent Nathan Hodge, the current solicitation for a shipment bid is the first such solicitation in several months.

He said that, according to his research, the most recent announcement of a potential arms delivery to Israel was posted by the Defense Security Cooperation Agency on Sept. 29 — for sale of F-35 Joint Strike Fighters.

Earlier that month, the agency notified Congress of the pending upgrades to Israeli Patriot missile fire units as well as sales of the GBU-39 Small Diameter Bomb.

Israel has long used US weapons in its attacks on the civilian population of the two Israeli-occupied Palestinian territories, the West Bank and Gaza.

In addition to $3 billion in direct aid a year, the US government supplies around $3 billion in weapons transfers to Israel, and $6 billion in loan guarantees (none of which have ever been repaid by Israel).