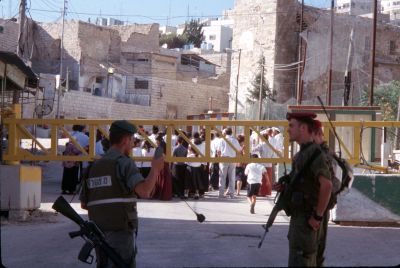 Israeli soldiers attacked on Thursday evening a protest organized by the Palestinian Peoplea Party and the Youth Assembly Against Settlements to commemorate the 16th anniversary of the Ibrahimi Mosque massacre. At least sixteen residents were wounded.
The protest was held at the southern entrance of Al Shuhada Street that was closed by the Israeli army since the massacre.The protest started from Al Nahda School in Abu Sneina neighborhood near the Ibrahimi Mosque. The protesters marched towards the Al Shuhada Street and the Vegetables Market, both closed by the Israeli military since the massacre.

Israeli and International peace activists participated in the protest, along with activists of the Palestinian Peoples Party and other factions.

The protestors chanted “no peace with settlements”, “Stop racial discrimination in Hebron”, “Obama, stop the blindfolded support to Israel”, “The Ibrahimi Mosque is an Arab, Muslim holy sites”, and several other chants.

The Israeli army attacked the protesters on Thursday evening and kidnapped one Palestinian and two Israeli peace activists.
Reporter Hisham Sharabati of the Youth Assembly Against Settlements, said that the protest was organized by the Assembly and the Palestinian People Party, and that parallel protests were held in 25 cities around the world, including New York in the United States, Berlin in Germany.

The protestors also chanted against Israel’s decision to consider the mosque as part of the so-called Jewish Heritage Trail.