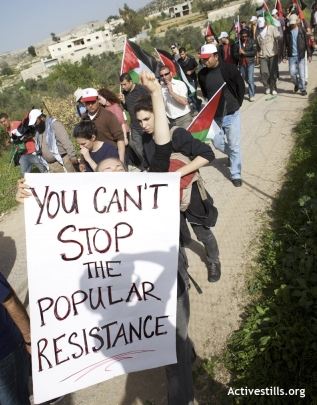 The Israeli army started gathering information, including recording license plates, of Israeli peace activists who protest along with Palestinian and International activist against the Annexation Wall and settlements in the occupied West Bank.

The Israeli army started gathering information, including recording license plates, of Israeli peace activists who protest along with Palestinian and International activist against the Annexation Wall and settlements in the occupied West Bank.

The measure is currently being carried out against those heading to the villages of Ni’lin and Bil’in, near the central West Bank city of Ramallah.

The army is using this information to hinder the freedom of movement and expression of the Israeli activists as they will not be able to cross any Israeli roadblock in the occupied West Bank.

Several activists were prevented from crossing a roadblock near Ramallah. The new list, which is constantly updating, currently includes registration numbers of eleven vehicles owned by the activists.

Israeli daily, Haaretz, reported that the army is apparently monitoring the routes the activists take in order to enter the two Palestinian villages known for their active nonviolent resistance against settlements and the Wall.

Last Friday morning, the Israeli forces stopped an Israeli Subaru Sedan vehicle at the Rantis roadblock and after comparing its registration number to a list of numbers obtained by the army, the vehicles was not allowed through.

An Israeli activist said that the army has a list of registration numbers of several vehicles, and that the list was signed by an Israeli army officer identified as Aviv Reshef, Haaretz said.,

Another activist told Haaretz that one of the soldiers even asked them whether their vehicle belongs to what he described as “Anarcho-mobile” referring to the Israeli Anarchists Against the Wall.

Activist Shai Pollack told Haaretz that it is likely that the army is also eavesdropping on their phone calls, emails, or even have a snitch among them.

Pollack added that the activists are not criminals or operating underground, and that the army is acting on preventing them from continuing their protests against the Wall and settlements.