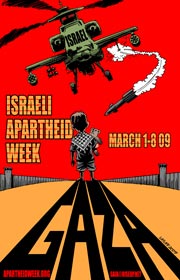 The Israeli government expressed rage over the “Israeli apartheid week” which stated on Monday in universities in more than 40 cities around the world, and calls for economic and academic boycott of Israel for its illegal policies in Palestine.

The Israeli government expressed rage over the “Israeli apartheid week” which stated on Monday in universities in more than 40 cities around the world, and calls for economic and academic boycott of Israel for its illegal policies in Palestine.

In 2004, a group of students started the “Israeli Apartheid Week” campaign in Toronto – Canada, and the event is currently marked by dozens of universities in 58 countries.

Several Israeli officials said that they are annoyed by the participation of senior Israeli academics in addition to Israeli artists and other figures.

The apartheid week includes screening documentaries about Israel’s apartheid policies and its illegal procedures against the Palestinian people.

Arab member of Knesset of the National Democratic Assembly, Dr. Jamal Zahalka, will be participating in three activities in New York, Ottawa and Montreal.
His participation angered several senior Israeli officials who demanded removing him from the Knesset.

The Israeli Foreign Ministry is currently holding talks with a number of organizations around the world in order to counter the Israeli Apartheid Week and to label it as a week targeting the “Israeli legitimacy”.

Several fundamental Israeli organizations appealed UN Secretary General, Ban ki-moon, to stop the participation of Francesca Marota, a UN official who collected information about the Israeli violations during the war on Gaza and presented them to Judge Richard Goldstone.

Marota will be speaking on Wednesday during a session in Barcelona. Other academics and legal experts will also be speaking at the session that focuses on Israeli violations against the residents in Gaza.

Zahalka told Maariv Israeli newspaper that the “racist regime in Israel is enforcing a big prison in Gaza and an apartheid system in the West Bank”.

Zahalka added that Israel also practices racism against the Arab minority in the country, and that it tries to tell the world that it is a democratic entity while on the ground maintains an apartheid system similar to regime that ruled South Africa.

It is worth mentioning that Professor Jeff Halper, head of the Israeli Committee Against House Demolition, will be participating in the Israeli Apartheid Week.

Halper, a professor of anthropology based in Israel, will be speaking about the BDS Campaign (Boycott, Divestment and Sanctions). His speech will be at the University of Glasgow.

Shir Hever, and Israeli economist based in Jerusalem will be giving a series of lectures at the University of Amsterdam. His lectures are entitled “Could the Economic Policies of Israel be Considered a Form of Apartheid?”.

In addition, director Shai Carmeli-Pollak will be screening his 2006 documentary ‘Bil’in Habibti’ at a number of universities in the Boston area.

The documentary is about the Israel army’s excessive use of force against nonviolent protests against the Annexation Wall and settlements in the West Bank.