Israeli repression in Palestine is escalating – Mazin Qumsiyeh: “The Israeli army wants me” 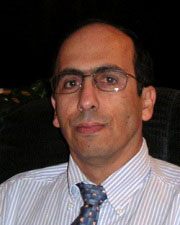 The Israeli army invaded Mazin Qumsiyeh’s neighborhood in Beit Sahour, a suburb of Bethlehem, on 2 March in the night, waking up his mother, wife and sister. Heavily-armed soldiers blocked roads during ‘the operation’. When his family opened the door, they demanded to see Mazin Qumsiyeh (*). They were told that Mazin already left to the US. He replies here to the questions of Silvia Cattori.Silvia Cattori: We heard that Israel is pressing hard on nonviolent protests. Can you give the background of this situation?

Mazin Qumsiyeh: Civil nonviolent resistance in Palestine, against the Zionist colonial project, has been going on for over 120 years. It escalated under British occupation between 1917-1947. But it became far more critical under the Zionist direct occupation from 1948 until today. The most visible events were publicized for example during the uprising of 1987 to 1991 when peaceful demonstrators were met with policies of breaking bones, shooting, home demolitions etc. With the effective ending of armed resistance in 2006 when Hamas entered the political process joining the other major factions, the only form of resistance that remained in a way threatening to the status quo of endless occupation was civil or popular resistance. Israeli authorities thus tightened the pressure on all forms of civil resistance. They arrested dozens of leading activists, harassed and beat others, and in several cases injured or killed peaceful demonstrators.

Silvia Cattori: How many people are in Israeli jails?

Mazin Qumsiyeh: There are over 11’000 political prisoners in Israeli jails. Hundreds of those are kept in so called administrative detention which means months and sometimes years without even seeing an Israeli military judge (unfair as that judge might be).

Silvia Cattori: What happened in Beit Sahour that led to the recent unrest, so that Beit Sahour is now just as tense as Bi’lin?

Mazin Qumsiyeh: Beit Sahour has a long and illustrious history of civil resistance that started in 1919. The town is 70% Christian and 30% Muslim. In the 1987 uprising, town people (all of them) decided to use tactics of civil resistance. This includes dumping Israeli issued ID cards, refusing to pay taxes, refusing to cooperate etc. The town was attacked repeatedly from the “Shdema” Israeli military camp at the edge of town (an area known as Ush Ghrab to the locals).

On 28 December 2000, town people invited Internationals including Israelis to march on the camp. Hundreds got into the military camp in a brilliant act of civil resistance. The success led to the founding of the International Solidarity Movement in Beit Sahour. The Israeli military vacated the site in April 2006. Town people built a “Peace Park” including a Children’s playground on part of the old site and land owners were able to access their lands for the first time in decades and started to reclaim it for agriculture. But radical settlers began coming to the site and pressing the Israeli government which refused to approve building a children’s hospital at the site (funding is available for this project). To mollify the settlers, the Israeli military is returning to Ush Ghrab.

A popular committee was created in February 2010 as Israeli bulldozers began working at the site. It includes representatives from all political factions and nongovernmental organizations. Its actions so far includes vigils and prayers, legal explorations, protests, land reclamation. The first vigil and prayer held at the park was faced with an Israeli brutal attack (see video at http://www.youtube.com/watch?v=4he1vayLrfo). The next week, a similar attack occurred on activists as they tried to explore the site (see video at http://www.youtube.com/watch?v=s4MDxqrofhU).

Silvia Cattori: But what about you? We heard that you personally were also targeted. Can you tell us what happened?

Mazin Qumsiyeh: On two occasions, Israeli officers at the scene warned me not to “organize” events. I am just one of many who coordinate and work to educate people and engage in other forms of nonviolent resistance. All forms of resistance are supported by International law. But in particular people respect our nonviolent form of resistance and support it. I just finished a book titled “Hope and Empowerment: A history of Palestinian Popular Resistance”. Clearly, the Israeli army is not happy about this. They had cracked down hard on civil resistance arresting dozens of activists in Bi’lin, Ni’lin, Al-Masara, and elsewhere just in the past year. They even injured and murdered other peaceful demonstrators.

The Israeli army wants me. The soldiers came to my house the day after I left on a speaking tour to the US. The heavily armed soldiers and intelligence [sic] officers came at 1:30 AM Tuesday morning. They demanded to see me and when I was obviously not there, they wrote a summons to appear for Monday March 8. Of course, I will not be able to appear then as I am still in the US and cannot change my schedule. I am sure they will pick me up when I return.

Silvia Cattori: What will you do now that you are in the US and know the Israeli army wants you?

Mazin Qumsiyeh: I will go back and face what comes. Truth and justice are not things we should compromise on regardless of the injustice and repression.

Silvia Cattori: Your family is Christian and your town is in majority Christian. Does Israel deal differently than with Muslims?

Mazin Qumsiyeh: No. Israel was established as a state for and by “the Jewish people” from around the world. Natives whether Christians or Muslims, were treated the same: with contempt, by oppression, and relentless attempts to separate us from our lands.

Silvia Cattori: What do you think of the problems between Fatah and Hamas?

Mazin Qumsiyeh: It is like prisoners held in a jail that sometimes they elect or select easy guys to accommodate the jailers and sometimes they try tough guys who refuse to cooperate with the jailers. The differences between them are subsumed by the fact that both have to live in the jail. I would say unfortunately many Palestinian factions including Hamas and Fatah fell under the spell of Oslo accords with its illusionary promises of “authority” when there is really only one authority west of the river Jordan: the state of Israel. What should have been done and is still doable is to struggle for equality and justice ala the struggle done in South Africa. We cannot accept Bantustans with the illusions of authority.

Silvia Cattori: What help or support do you expect from the outside world?

Mazin Qumsiyeh: I think just like happened with apartheid South Africa, the International community has a critical role to play. Boycotts, divestments, and sanctions (BDS) based on the Palestinian civil society call to action are growing everywhere (see http://bdsmovement.net). We urge all to join them.

Beyond that, reaching out to media, politicians, church leaders, and ordinary people to educate them about what is going on is critical. This is especially true in countries whose government enable this repression to continue (e.g. Israel, US, Canada, Australia, European countries, Arab countries with friendly relations to Israel).

Silvia Cattori: Thank you very much.

(*) Mazin Qumsiyeh is a tireless activist for Palestinian human rights who returned to his hometown of Beit Sahour in the Israeli-occupied West Bank and now teaches at Bethlehem and Birzeit Universities. He previously served on the faculties of the University of Tennessee, Duke and Yale Universities. He is now president of the Palestinian Center for Rapprochement Between People in Beit Sahour, a suburb of Bethlehem. The author of “Sharing the Land of Canaan: Human Rights and the Israeli-Palestinian Struggle” (2004), Qumsiyeh is both a human rights activist and a scientist who has a lengthy list of publications on genetics to his credit.