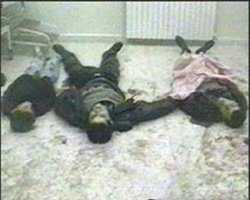 Israeli Ynet News obtained a video showing fundamentalist Jewish settlers celebrating the memory of terrorist Dr. Baroch Goldstein, and praising his crime that targeted Muslim worshipers at the Ibrahimi mosque in Hebron in February 25, 1994, killing 46 worshipers and wounding dozens.The setters were dancing and singing a special song meant to praise Goldstein and the way he opened fire at the worshipers killing and wounding dozens of them.

The “special celebration” was conducted at a Palestinian home that became inhabited by fundamentalist Jewish settlers through a court order in Sheikh Jarrah, East Jerusalem.

The Ynet News reported that the festivities of the settlers are similar to those held by fundamentalist settlers in the southern West Bank city of Hebron, where the massacre took place.

The video that was obtained by Ynet was filmed on Monday; it shows the settlers and their children, dancing and singing to praise Goldstein.

Assaf Sharon, a leftist leader of a campaign against the illegal settlers in Sheikh Jarrah, told the Ynet news that the fundamentalist settlers are allowed to celebrate and to hold offensive activities while the Palestinians, the original residents of the neighborhood, cannot say a single word and cannot do anything.”

Sharon added that the settlers were playing loud music and celebrating the massacre of Goldstein.

The Ynet tried to interview some of the settlers to ask them about their songs praising Goldstein but they elected not to respond.

It is worth mentioning that Israeli leftists are planning a protest this Saturday against the settlers support for the crime of Goldstein and their provocative and public display of violence.

Baroch Goldstein is an American Jew, who lived in the illegal settlement of Keryat Arba’, in the center of Hebron city. He was a member of the terrorist Kach movement.