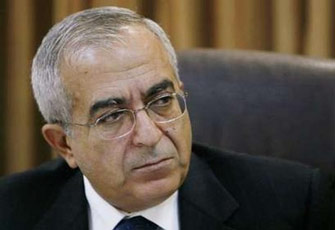 Palestinian Prime Minister, Dr. Salaam Fayyad, met, on Thursday, at the Ramallah Ministerial Council with John Holmes, UN coordinator of humanitarian affairs in the occupied Palestinian Territory, and informed him on the situation in Palestine, especially the dire situation in the besieged and impoverished Gaza Strip. Dr. Fayyad also complained about the illegal Israeli measures in East Jerusalem as Israel is ongoing with its settlement activities and the violations against the residents and their homes.

He added that for the indirect talks with Israel to succeed, the International community must commit Israel to its obligations.

Fayyad said that Israel should not be allowed to continue its settlement activities, especially in East Jerusalem, must stop its invasions and attacks, and must lift the siege imposed on Gaza.

The Palestinian Prime Minister thanked the United Nations for its relief work in Palestine, especially in the Gaza Strip.

He stated that the International Community and the Quartet Committee (the United States, the United Nations, Russia and the European Union) must be actively involved in Middle East peace talks in order to ensure an end to the Israeli occupation and the establishment of a Palestinian State with East Jerusalem as its capital.