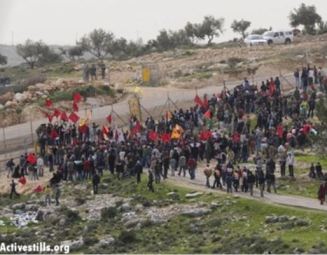 The Israeli government sent messages to the Palestinian Authority (P.A) demanding it to act on stopping popular protests in the West Bank, and to forbid P.A officials from participating in any sort of protest, including campaigns to boycott Israeli goods. Israel claims that such protest could eventually turn violent. Yet the Israeli army always uses violence against nonviolent protests, such as protest against the Annexation Wall.

Israel told the P.A that if its officials do not act on “decreasing incitement”, and on stopping boycott campaigns, it would reduce the level of cooperation with it.

Israel claimed that it reduced its invasions and arrests in the Palestinian territories, but also threatened to increase them should P.A officials fail to act on stopping nonviolent protests.

Israel paper, Haaretz, reported that the new Israeli demands were made during talks between senior Israeli and Palestinian security officials.

Haaretz reported that the officials also discussed statements made by President, Mahmoud Abbas, against Israel’s violation of regarding the Al Aqsa Mosque in East Jerusalem, and the Bilal Mosque in Bethlehem as part of the “Jewish Heritage Trial”.

Israeli officials stated that some P.A officials are actively involved in organizing popular protests in the West Bank, but also said that a third Intifada is unlikely.