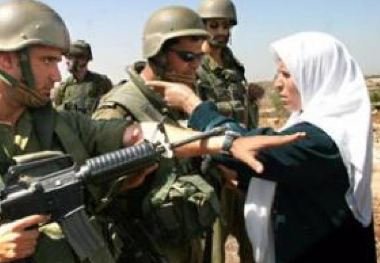 Five Palestinians women preferred to go home rather than heading to an Israeli prison to visit their detailed family members after Israeli soldiers stationed at a Roadblock near the central West Bank city of Ramallah demanded to strip-search them. Qaddoura Fares, head of the Palestinian Prisoner Society, stated at a press conference on Tuesday that this is one of the illegal means Israel is using to target the detainees and their families.

He added that the families of the detainees decided to strike for a month in April to protest the illegal Israeli measures. They will not be visiting their detained family members and would be holding protests in front of the Red cross.

Israel is also denying 1200 detainees from any visitations as they are classified as “security risk”.

Fares called on all factions and different institutions to participate in the strike and to highlight the issue of the detainees and their plight in Israeli prisons.

Palestinian Minister of Detainees, Issa Qaraqe’, said that Israel is always trying to strip-search the families of the detainees, especially the women, and that such demands are mainly made at the prisons.

He added that this is a direct violation to the Fourth Geneva Conventions, and all related human rights laws.

Qaraqe’ said that women and children are subjected to humiliation by the soldiers at different roadblocks, and are asked to strip in order to be searched, an issue which pushes them to return home instead of continuing their way to visit their detained family members.

He further stated that the strike comes in solidarity with the detainees from the Gaza Strip as their families were not able to visit them since more than three years.

Dozens of detainees are deprived from perusing education in prison, while Israel is also not allowing the entry of books, educational materials and even clothes.