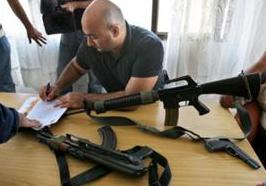 The Israeli Authorities decided to pardon ten fighters of the Al Aqsa Brigades, the armed wing of Fateh movement. A list containing the names of the fighters was handed to the Palestinian Authority in the West Bank. Besides the ten fighters who received a full pardon, can move freely and travel, Israel issued partial pardons to a number of Fateh fighters who will be able to move around within their own districts.

Al Ahrar Movement described the Israeli decision as another manipulation. The movement called on the fighters not to trust Israel and to remain alert of any possible Israeli attempt on their lives.

It said that the Israeli declaration is parallel with the launching of U.S. mediated proximity talks between Israel and the Palestinians.

The movement said that this declaration comes to boost Mahmoud Abbas, “who termed out of office, and to boost his fruitless negotiations with Israel” .

It further stated that this is not the first time the army deceives the resistance, and added that the Israeli army assassinated two months ago three Aqsa Brigades fighters from Nablus although they received a full Israeli pardon.