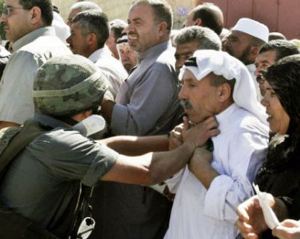 Israeli soldiers, undercover forces and policemen attacked and wounded on Monday evening, two Palestinians in Al Bustan neighborhood, in East Jerusalem, and kidnapped several youths. The two wounded residents were identified as Mousa Odeh, 50, and Mohammad Abed Odeh, 48. Both are members of The Committee To Defend Al Bustan Neighborhood.

They were violently attacked and beaten by the soldiers before they were kidnapped by the undercover forces.

The army also kidnapped several youths in the center of the neighborhood.
Resident Fakhri Abu Diab, head of the Committee To Defend Al Bustan Neighborhood, reported that this is not the first attack carried out by the undercover forces against Al Bustan neighborhood and its residents.

The attack comes amidst ongoing illegal construction of settlements on Palestinians landsm and home demolition in the city.

The Palestinians seek Jerusalem as the capital of their anticipated future state, while Israel is refusing to hold talks on East Jerusalem and considers it part of the “united” capital of Israel.

East Jerusalem was occupied by Israel along with the West Bank and the Gaza Strip after the 1967 war.