Teachers Not Allowed Into School Isolated Behind The Wall 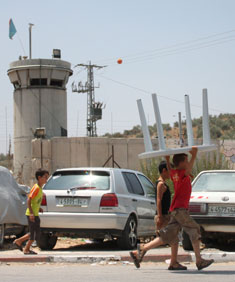 For the second day, Israeli soldiers prevented on Thursday teachers of the Al Dab’a School, totally isolated behind the Annexation Wall in Qalqilia district, from reaching the school, and demanded them to be searched by special X-Ray equipment. Mahmoud Odeh, schools headmaster, said that nearly 250 students, males and females, study at this school, and that they come from three nearby villagers.

He added that for the past seven years, the teachers were granted permits to cross to the other side of the Wall but were never searched.

Odeh stated that the teachers refuse to be X-rayed whenever they go to school due to the harm caused by X-Ray, especially for pregnant women.

The teachers held a two-hour strike on Thursday morning while their students protested on the other side of the wall.

They were not allowed through and the school could not have classes for the second day.

Odeh warned that finals are nearing while the occupation is harassing the students and their teachers, an issue that will affect the students, especially those in their final school year.

The teachers demanded the Palestinian Authority to intervene and resolve this crisis caused by the occupation and its illegal practices.