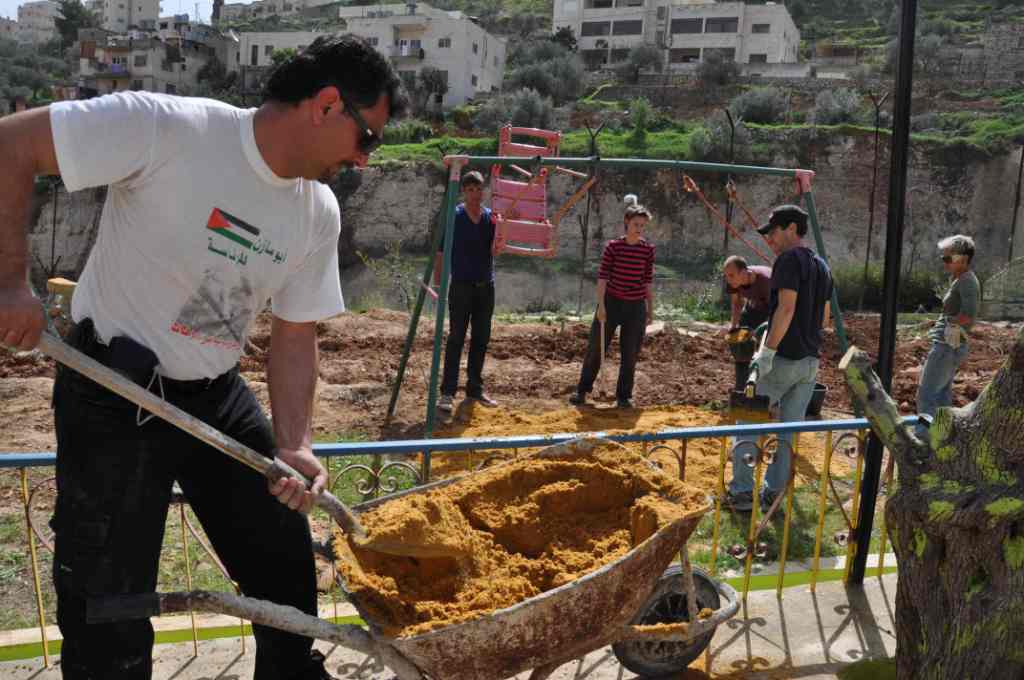 Palestinians along with international and Israeli supporters replanted trees on Thursday at the town of Beit Jala, near Bethlehem city southern West Bank.
A dozen people armed only with pick axes and hoes, flattened out the bulldozer tracks and deep holes left from uprooted trees, reset two swing sets, and brought in sand by the bucket for the new playground.

Young olive trees were replanted in place of the mature trees that were destroyed during the first days of uprooting last week.

The playground is used by many of the neighborhood children, and the family who owns the land welcomes people to enjoy the shade next to their home in the heat of the summer.

As people worked in the sun today, army jeeps made rounds on the road above the home, and stood watch from the road on the opposing side of the highway. One jeep came down to the playground, but people continued their work as soldiers took pictures and asked for the Palestinian participants identification cards.

Last week in Beit Jalla residents and activists held demonstrations, a roadblock, tree plantings, and meetings with Palestinian officials. This week the community waits for a court decision to see whether work on the wall will continue.

On March 4th the Biet Jallah municipality obtained an order to stop work on the wall. Approximately 70 olive trees had already been uprooted buy this time, the septic system for a family was broken leaving raw sewage spewing out below their home, and a playground was bulldozed.

If the wall is finished it will stand only several meters from some of the homes. As the municipality builds its legal defense, activists are preparing for future interventions in case that Israel continues the land theft.