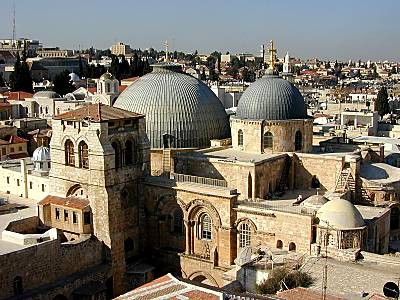 Palestinian Christian organizations, figures and many other Palestinians from the Jerusalem and the surrounding area have sent a letter on March 4, to the heads of churches in Jerusalem, demanding them to encourage all Christians in Palestine to enter Jerusalem for the Easter celebrations without applying for permits from the Israeli authorities.The letter also condemns the Israeli measures of preventing many people from entering the vicinity of the church of the Holy Sepulcher during the holy week,and stresses on the right of worship for all human beings in their holy sites.

A full copy of the letter and the names of the signatories up to date below:

Your Beatitudes, Graces and Most Reverends

Re: Upcoming Easter Celebrations and Ensuring Participation of Local Faithful

The upcoming Easter Celebrations are most significant for cementing the faith of the local and expatriate faithful who flock to the Holy Land and to Jerusalem, in specific in reaffirmation of old age traditions and in hope for the vigor and strength that these celebrations offer.

As we approach these Celebrations, we are reminded of the infractions imposed by the Israeli authorities on Freedom of Access to the Holy Sites during the Holy Week that particularly target the local Palestinian Christian population residing in the Palestinian Territories. The permit system instituted by the Israeli authorities to allow a limited number of faithful to arrive to Jerusalem or Bethlehem during the high holidays is itself an affirmation of the systemic infraction of basic human rights of access and of religious observance.

From the practices from previous years even the permit system instituted by the Israeli authorities themselves is not honored when Easter coincides with the Hebrew Pessach. Using hermetic closure of the Palestinian Territories as an excuse, all permits issued by the Israeli authorities are no longer respected as the faithful are turned back at checkpoints with the excuse of ‘CLOSURE’. This is further proof of the inherently discriminatory nature of the denial of the basic rights to religious observance. We call upon all of Your Beatitudes, Graces and Most Reverends to encourage the faithful to arrive from the rest of the Palestinian Territories without the need for having permits. This could be an occasion to confirm that religious observance does not need permits and that the selective process of permit issuance is categorically unacceptable.

More specific infractions on the rights of the faithful during Easter Celebrations is the order by the Israeli authorities for the encirclement of the Old City of Jerusalem and denial of freedom of entry to the local faithful as well as pilgrims on pretexts of public safety and order. This is particularly the case during the celebration of Holy Fire on the Saturday of Light preceding Easter Sunday. Hundreds of local faithful families from Jerusalem and elsewhere in the country are denied entry to the Church of the Holy Sepulchre and its vicinity. The pretexts used by the Israeli authorities to deny the faithful participation in the most sacred of the Easter rites are unacceptable and are further proof of the purposeful denial of the basic right of access to religious sites and participation in religious observances. Throughout the Ottoman, British Mandate and Jordanian times thousands of local faithful and pilgrims took part in the celebrations. Never was there a feeling of exclusion as is felt nowadays particularly on celebrating the ceremony of Holy Fire. Tens of Greek Orthodox families traditionally carry their family banners in the ceremony and are among the first to receive the holy fire. These families are not able to access the Holy Sepulcher due to the restrictions imposed by the Israeli authorities.

The Kairos Palestine Document states: ‘Religious liberty is severely restricted; the freedom of access to the holy places is denied under the pretext of security. Jerusalem and its holy places are out of bounds for many Christians and Muslims from the West Bank and the Gaza strip. Even Jerusalemites face restrictions during the religious feasts. Some of our Arab clergy are regularly barred from entering Jerusalem.’

We ask Your Beatitudes, Graces and Most Reverends to ensure that all faithful who wish to participate in the different celebrations, rites and rituals of the reinvigorating Easter Liturgy are able to do so without hindrance. Any system which assigns entry permits to Easter celebrations necessarily denies the rest of the faithful their rights of participation in these religious events. We trust that the faithful are cognizant of the issue of public safety and we would ask you to involve the various Boy Scout troupes pertaining to your respective Church communities in ensuring orderly conduct and crowd management. This is done in various celebrations without the interference and restrictions imposed by the Israeli authorities that are often unaware and insensitive to the significance of the religious ceremonies in which the faithful wish to participate.
It is befitting to recall at this blessed Lent Season the paragraph in the 1994 Memorandum of Your Beatitudes the Patriarchs and the Heads of the Christian Communities in Jerusalem on the Significance of Jerusalem for Christians:
For Christianity, Jerusalem is the place of roots, ever living and nourishing. In Jerusalem is born every Christian. To be in Jerusalem is for every Christian to be at home. For almost two thousand years, through so many hardships and the succession of so many powers, the local Church with its faithful has always been actively present in Jerusalem. Across the centuries, the local Church has been witnessing to the life and preaching, the death and resurrection of Jesus Christ upon the same Holy places, and its faithful have been receiving other brothers and sisters in the faith, as pilgrims, resident or in transit, inviting them to be reimmersed into the refreshing, ever living ecclesiastical sources. That continuing presence of a living Christian community is inseparable from the historical sites. Through the ‘living stones’ the holy archaeological sites take on ‘life.’

As we wholeheartedly support this statement, we ask for your quick consideration of this issue since we do not want for yet another Easter to pass and the faithful experiencing once again the denial of their basic and natural rights for active and full participation in the celebrations.

Organizations that have endorsed the letter so far