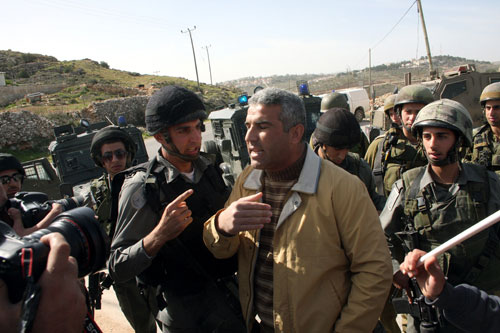 Villagers of al-Ma’sara, near the southern West Bank city of Bethlehem, protested on Friday the Israeli built wall on villagers’ lands.
The people were joined by Israeli and international supporters. The protest kicked off from the village center and headed towards the wall construction site.

Israeli troops erected a military checkpoint at the village entrance and did not allow people to move any further, troops also took positions at nearby rooftops.

The protest today was organized in honor of International Women’s Day. At the checkpoint organizers delivered speeches in Arabic, Hebrew and English. In the speech delivered in Hebrew, an Israeli activist called for the soldiers to put down their weapons.

Later, the protesters moved the military checkpoint and moved towards their lands. Troops stopped them, announced that the area was a closed military zone, and asked people to move back.

The villagers and their supporters refused and staged a sit in at the road. Soldiers tried to stop the chanting of the people by using loud speakers. After a short period of shouting back and forth between soldiers and protestors, organizers ended the protest and promised to come back next week.