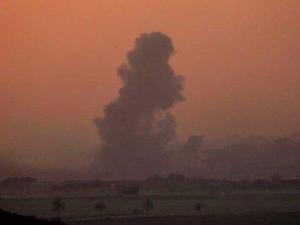 The targeted area is believed to contain siege-busting tunnels. The two residents suffered mild-to-moderate wounds and were moved to Abu Yousef al-Najjar Hospital in Rafah, in the southern part of the region.

The Quds Net news website reported that several residents who were in a bombarded tunnel were initially trapped, but managed to exit it on the Egyptian side.

The army also bombarded open areas in Dir al-Balah in central Gaza, and in Khan Younis in southern Gaza.

Furthermore, the Israeli Air Force fired several missiles at a blacksmith workshop in al-Zeitoun neighborhood in Gaza City. The workshop was totally destroyed; no injuries were reported.

The two were riding a cart when the army attacked them leaving behind the cart, and the donkey dragging it.