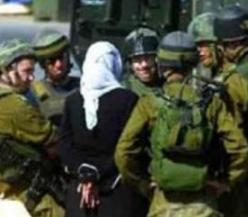 Troops violently attacked the woman before cuffing and blindfolding her.

Later on, the army kidnapped 14-year-old child during clashes that took place in the camp.

The army invaded the camp and clashed with dozens of residents. Soldiers fired rounds of live ammunition, rubber-coated bullets and gas bombs.

The army recently kidnapped more than 250 residents during clashes that took place after Israeli settlers inaugurated a synagogue near the Al Aqsa Mosque. Among the kidnapped residents were 30 children below the age of 14, and a number of reporters.