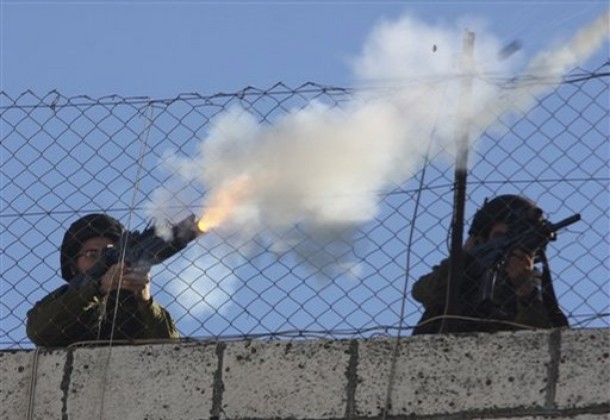 Palestinian medical sources in the southern West Bank city of Hebron reported Friday evening that 47 residents were wounded during clashes with Israeli soldiers in the city and the nearby Beit Ummar town. 21 residents received treatment after inhaling Gaza fired at them in Hebron, and nine others were wounded by rubber-coated bullets. The clashes took place near the Ibrahim Mosque.

Similar clashes took place in Al Zahed area in the city while the army fired gas bombs and rubber-coated bullets.

Sources at the Red Crescent in the Hebron reported that some of the wounded residents were moved to the local governmental hospital, and the Muhammad Al Muhtasib Hospital, while the rest received treatment by field medics.

Soldiers also occupied rooftops of several homes and used them as military posts and monitoring towers.

Twenty residents received treatment after inhaling gas fired by the army while six others were wounded by rubber-coated bullets in Beit Ummar town.

In the latest in a series of protests across the West Bank, Palestinian youth in the southern West Bank city of Hebron threw stones at Israeli soldiers Friday, while the soldiers fired rubber-coated steel bullets, tear gas and concussion grenades at the youth from inside their armored vehicles.

The protests in Hebron coincide with non-violent demonstrations on Friday challenging the Israeli government’s approval of a plan to construct 1,600 new Jewish-only housing units on illegally-seized Palestinian land in East Jerusalem.

One Al Jazeera reporter in Hebron reported that ‘The amount of tear gas used in the city is just quite unbelievable”, adding that several Palestinian youth had been injured.

The clashes in Hebron come in the midst of increased Israeli settler violence in recent months, including the shooting and beating of Palestinian civilians in the Old City of Hebron and nearby neighborhoods.

The city of Hebron is well-known throughout the West Bank for being home to the most violent and extreme Israeli settlers, many of whom openly celebrate and admire Baruch Goldstein, who was responsible for gunning down 27 Palestinian civilians who were praying in a mosque in 1994.

500 Israeli settlers live in illegally-seized Palestinian land in Hebron, and the Israeli government has deployed several thousand troops to the city to protect the settlers as they attack the indigenous Palestinian population with impunity.