12 Injured In Israeli Airstrikes In Gaza 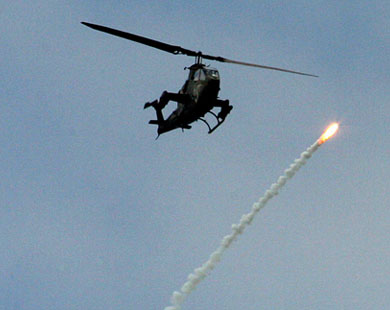 Palestinian medical sources in reported Saturday at dawn that 12 Palestinians were wounded when the Israeli Air Force bombarded a number of tunnels, and the Gaza International Airport east of Rafah, in southern Gaza.The sources added that the wounded residents were moved to the Abu Yousef Al Najjar in Rafah. Three of the wounded suffered moderate wounds.

The army also targeted several areas including two siege-busting tunnels in Rafah, a site believed to be a weapons-manufacturing workshop and the airport in Rafah.

An Israeli army spokesperson reported that the bombardment came in retaliation to five homemade shells fired by the resistance against adjacent Israeli settlements over the last two days.

Palestinian resistance groups recently resumed the firing of homemade shells after Israel declared more plans to build settlements in the Old City of Jerusalem and around it, and after attacking worshipers at the Al Aqsa mosque.

The Palestinian Ministry of Detainees reported that Israel kidnapped more than 250 Palestinians during the recent clashes in Jerusalem. At least 30 of the kidnapped residents are children, mainly around the age of 14.

Several local reporters were also kidnapped by the army and the Israeli police.
Most of the clashes were focused in Al Esawiyya, Wad Al Joz and Al Suwwana neighborhood in East Jerusalem. The army released some of the detained residents after imposing high fines on them. Dozens of residents were wounded.