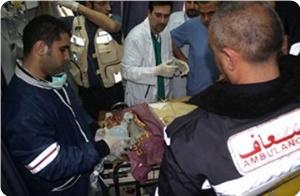 Palestinian medical sources in Nablus, in the northern part of the West Bank, reported that two Palestinian children were killed by Israeli military fire in Iraq-Burin village, south of Nablus. The two children were identified as Aseed Abdul-Nasser Qadous, 16, and Ibrahim Abdul-Qader Qadous, 16.

Aseed was shot in his abdomen during Saturday clashes with invading Israeli forces. He was admitted to surgery but died of his wounds on Sunday morning.

He bled to death despite extensive efforts to save his life and despite receiving several units of bloods.

Meanwhile, Mohammad, 16, was shot in his heart and died instantly.

Local sources reported that the clashes took place near the Bracha illegal Israeli settlement, and that both Israeli soldiers and settlers opened fire at the protestors.

A group of fundamentalist armed settlers from Yitzhar and Bracha illegal settlements attacked the village under the protection of the Israeli troops, local sources reported.