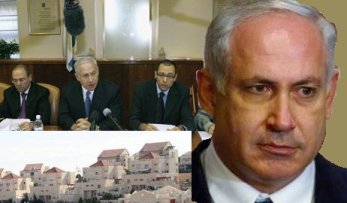 The Jerusalem Municipality canceled a meeting that was scheduled for Monday to discuss new construction plans in Abu Ghneim Mountain (Har Homa Settlement), Israeli Army radio reported. The municipality did not clearly state the reason behind the decision while members of the so-called Planning and Construction committee at the municipality that the decision was made to avoid arguments with the U.S. Administration during Netanyahu’s visit to Washington this week.

The Municipality wanted to approve more units for Jewish settlers in Abu Ghneim and in other parts of the occupied territories.

Israeli paper Haaretz reported last week that the municipality canceled over the last two weeks any discussions on settlement activities.

But the Israeli Interior Ministry, and Interior Minister, Eli Yishai, said that the committee was not instructed to change any of its meetings’ agenda regardless of the current arguments with the U.S. Administration.

The Israeli Government of Netanyahu wants to construct thousands of units for Jewish settlers in the occupied West Bank and in occupied East Jerusalem despite demands from the United States to freeze all settlement construction and expansion .

But Netanyahu and his coalition said that Jerusalem will remain the eternal capital of Israel and will never be partitioned.

All settlements in the occupied West Bank and in occupied East Jerusalem are illegal, violate the International Law and the Fourth Geneva Conversions.

Netanyahu claims his government is interested in peace talks with the Palestinians, but continues to prepare more plans for settlement construction and expansion.