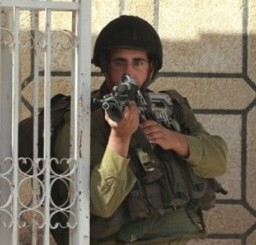 The fighters exchanged fire with the army in Hebron and fled the scene unharmed.

The army invaded Beit Awwa and several surrounding areas searching for the shooters.

The shooting took place on the road that links between Doura town, south of Hebron, and Beit Awwa.

The road in question was shut down by an Israeli court ruling for ten years, and was only opened 45 days ago. It is heavily used by the soldiers and Israeli settlers.