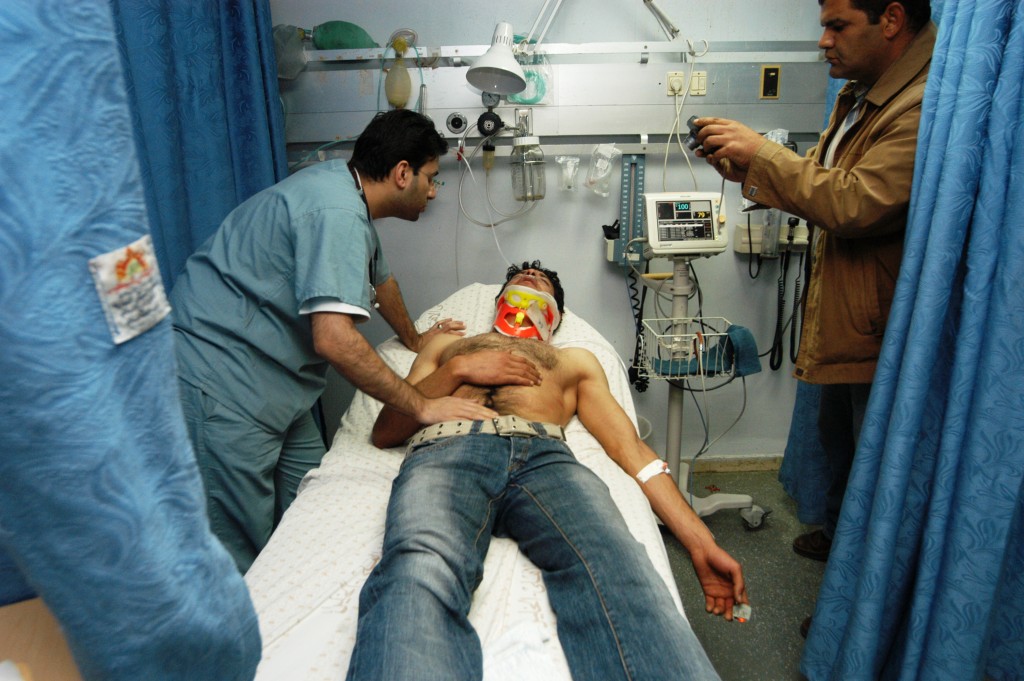 The Israeli military released on Tuesday at dawn Omer Aladdin from the village of Al Ma’ssara, near the southern West Bank city of Bethlehem.
Aladdin was detained by Israeli troops last week while passing thought a military checkpoint near Bethlehem city.

After hours of his release Aladdin had to be taken to hospital after suffering health complications. He was tortured by the military during weeklong detention. Doctors at a Hospital in the southern West Bank city of Hebron diagnosed Omer Aladdin with cuts and broses due torture by the military. Aladdin was admitted to the hospital for 24 hours.

“ I was on my way to Ramallah city with my classmates to watch a play, soldiers stopped our buss and started to search it. During the search a soldier used very rude words to talk to my classmate, I protested and told him this is not the way to talk to a lady. Later troops took my ID card and forced me out of the bus. They took me aside and started beating me using rifle-butts and batons’. Aladdin told IMEMC over the phone.


,br />
He added “soldiers refused to allow me medical care after they detained me at the checkpoint. Later they allowed me to see the army doctor, he refused to give me any medical care and told me that I have no health issues, and ignored the fact that I was bleeding from my leg and face.”

Aladdin was detained at a military interrogation center in Jerusalem, he talked about his experience there.

“I was interrogated for six days I, they beat me up, they refused to allow me to wash or change my cloths. It was a very bad experience, I was covered with blood for days.

Aladdin, who suffered an injury to his leg from the beating, was questioned over suspicions of participating in demonstrations and assaulting the soldier who detained him.

Dozens of eyewitnesses who were at the checkpoint at the time of his detention can attest to the fact that it was, in fact, Aladdin who was assaulted. He was finally brought in front of a judge for the first time this Sunday, which was also his first opportunity to see a lawyer, and informed him of the torture.

Aladdin was previously detained by the Israeli army from 2005 to 2009; the military accused him of organizing protests at his University in Hebron city, in the southern part of the West Bank.

Following a short hearing this Sunday, the military judge harshly criticized the prosecution and the police, saying there is no evidence connecting Aladdin to any violence, and ordered his release.

This is the second time this month that an organizer from Al Ma’sara is detained and assaulted at the same checkpoint, known to locals as the “container checkpoint” after Border Police officers recognized them from demonstrations.

On March 2nd, the mayor of Al Ma’sara, Mahmoud Zawahre was detained and beaten on his way to a meeting in Ramallah city.

Aladdin and his lawyers are now considering the option of filing both criminal and civil suites in an attempt to challenge the impunity and in accountability of members of the Israeli armed forces.