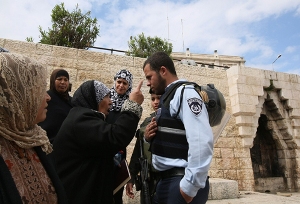 Israeli occupation’s Jerusalem Municipality has given final approval to a group of settlers to construct 20 housing units in Sheikh Jarrah. The announcement comes during the visit of Israeli Prime Minister Benjamin Netanyahu to Washington to meet with President Barack Obama in Washington.

The construction site locates in Shepherd Hotel in the Sheikh Jarrah neighborhood.
Moskowitz, an influential supporter of the settlement organization Ateret Cohanim and heightened Israeli settlement in occupied Jerusalem, plans to tear down the hotel and build housing units for Jewish settlers in its place.

The local planning council initially approved the plan in July, a move which angered Britain and the United States and prompted them to call on Israel to cancel the plans.

The council issued its final approval for the project last Thursday, which now enables the settlers to begin their construction at once.

An existing structure in the area will be town down to make room for the housing units, while the historic Shepherd Hotel will remain intact. A three-story parking structure and an access road will also be constructed on site.