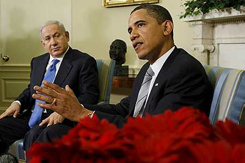 The Sama News Agency reported that the President of the United States, Barack Obama, insulted the Israeli Prime Minister, Benjamin Netanyahu, when he told him “the meeting is over” as Netanyahu continued to try to connect the settlements issue with the Iranian “Nuclear File”, and refused to halt settlement activities in East Jerusalem.The Agency said that senior sources told its reporter that Obama was angered by the stance of Netanyahu and told him “you have to understand that you are intentionally insulting us in front of our allies… and now you are sitting here with me, while your government declares another settlement project in Jerusalem”.

According to Sama, Obama left the meeting hall and told Netanyahu “next time when you come with new and different proposals, ask to meet me again”.

Later on, Netanyahu asked for another meeting with Obama, but the meeting ended within 30 minutes after Obama told Netanyahu “you cannot deceive your main and only strong ally in the world”.

White House sources reported that Netanyahu decided to cancel all his TV interviews with US stations, and that he apparently wants to prepare for diplomatic rounds meant to ease the tension with the United States.

But According to Israeli daily, Haaretz, Netanyahu stated Thursday that progress was made towards ending the crisis with the U.S over settlement activities.

He said that he wants to reach a “compromise” that resolves the crises with the United States and at the same time maintains the “standard policies of all Israeli settlements”, Haaretz added.

One hour after his expected arrival in Israel on Thursday evening, Netanyahu will be holding a meeting with his ministers to inform them on the outcome of talks with Obama and his administration.