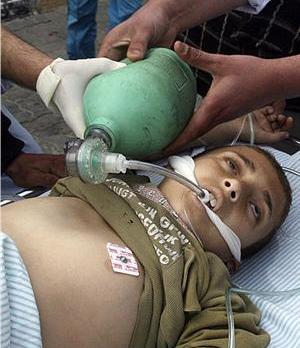 Palestinian medical sources in Gaza reported that a Palestinian child was shot and wounded on Friday afternoon near the Beit Hanoun (Eretz) crossing , in the northern part of the Gaza Strip.The child was identified as Sa’id Abdul-Aziz Hamdan, 15; he suffered moderate wounds.
Eyewitnesses reported that the fire came from an Israeli military monitoring tower in the area, and that the child was collecting stones when he was shot.

On Friday, Israeli soldiers shot and wounded two residents in Beit Lahia, in the northern part of the Gaza Strip, and in Rafah, in southern Gaza.

Also on Friday, two Israeli soldiers were killed and five were wounded during clashes with Palestinian fighters in the southern part of the Gaza Strip. Two fighters were also killed in the clashes.

The army stated that soldiers of the Golani Brigade came under Palestinian fire after they advanced into several areas near the Kissufim Crossing to search for explosives placed by the fighters on Friday after noon.

Two soldiers, including a senior commander of the Golani Brigade, were killed and five were wounded. The wounded soldiers were moved to Soroka Hospital in Be’er Sheva.

Two Palestinian fighters were killing during the clashes, and several Palestinians were wounded.