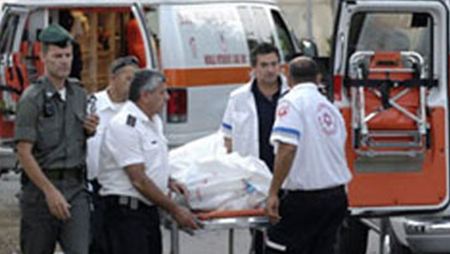 The Al Qassam Brigades, the armed wing of Hamas movement, claimed responsibility on Friday for killing two Israeli soldiers during clashes that took place east of Khan Younis, in the southern part of the Gaza Strip. At least two Palestinians were killed and several others were wounded. Israeli military sources confirmed that news and said that a senior commander of the Golani Brigade, and another soldier, were killed in the clashes.

The Hamas movement said that its fighters managed to ambush Israeli soldiers after noticing a military unit advancing into the area.

Abu Obaida, spokesperson of the Al Qassam Brigades of Hamas, told the Palestine News and Information Center, that the clashes are part of the retaliation against the occupation and its polices.

He added that the resistance is always ready to counter any Israeli offensive.
Israeli sources reported that two soldiers were killed and two were wounded when an explosive charge detonated near their jeep, east of Khan Younis.

The army said that the fighters were planning to kidnap Israeli soldiers during the attack.

The Palestinian Ministry of Health said that there are at least two Palestinians killed, but the number could rise as medics are not able to enter the area.

Dr. Moawiya Hassanen, head of the Emergency Department at the Palestinian Ministry of Health in Gaza, said that the army surrounded several ambulances and prevented them from reaching the area where the clashes took place.

He said that two or three fighters were killed and that two others were likely wounded, but the army is firing at any moving object in the area, including firing at ambulances and medics.

Medical sources in Khan Younis said at least two residents were wounded, and that one of the wounded is a 12-year-old child identified as Nassim Abu Doqqa.

But Abu Obaida, spokesperson of the Al Qassam Brigades, said that Qassam fighters are behind the attack.

He said that after several Israeli military vehicles advanced on Friday afternoon into an area east of Khan Younis, the fighters immediately opened fire at the invading forces and placed explosive charges.

Abu Obaida added that military helicopters tried to provide aerial coverage to the invading forces, but after the fighters managed to kill two soldiers of the infantry brigades, and helicopters had to evacuate the killed and the wounded.