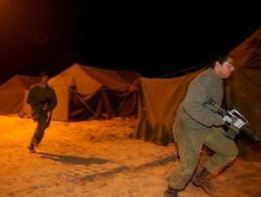 Palestinian medical sources in Khan Younis, in the southern part of the Gaza Strip, reported that six Palestinians were wounded on Friday evening after the army bombarded an area East of Khan Younis. One of the wounded residents is a child who suffered serious injuries.

The Israeli air force also fired missiles at residents near Al Ruwwad playground in Abasan Al Kubra area. Six Palestinians were wounded including the child who suffered serious injuries after being shot in the back.

The attack came hours after the resistance killed two Israeli soldiers and wounded five others in southern Gaza.

Two fighters were also killed in the clashes and several residents were wounded.
One of the soldiers is a commander who was killed by a grenade, while the other was killed by gunfire during ensuing clashes.

The region is likely to witness further escalation as more infantry brigades, tanks and artillery brigades were deployed along the border with Gaza.

Resistance factions in Gaza, especially the Al Qassam brigades of Hamas, said they are ready to counter any Israeli invasion or attack.

Israeli Prime Minister, Benjamin Netanyahu, said that “Israel’s strong stances against those who wish to harm it are well known”.