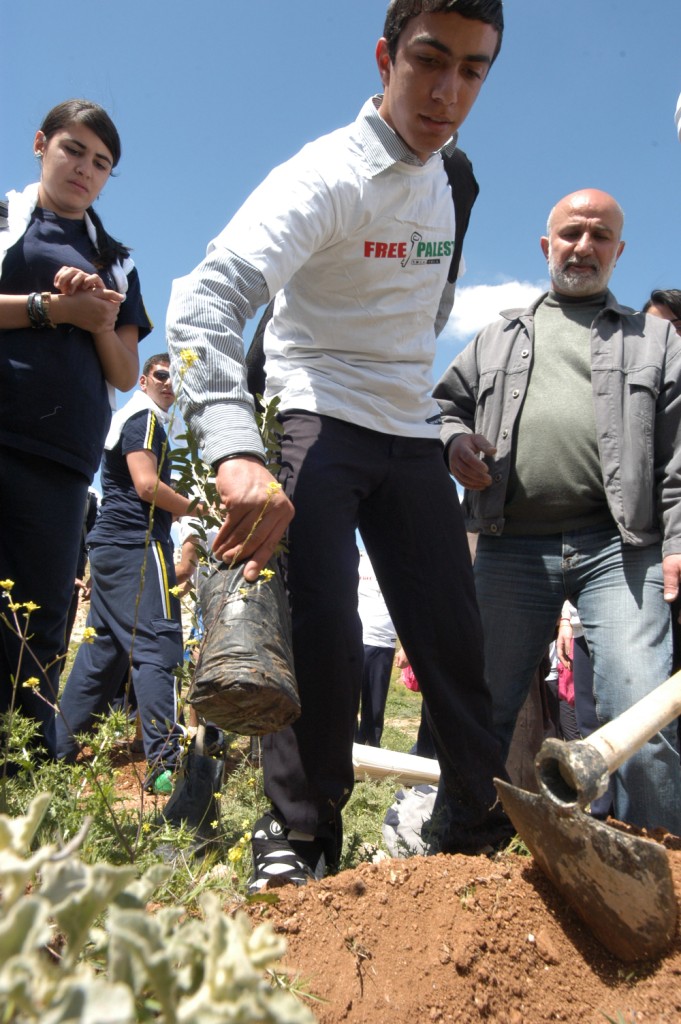 On Tuesday, hundreds of women with their children, nearly 300 high school students, many university students, and teachers joined farmers and activists at the town of Beit Sahour, near Bethlehem, Southern West Bank, to mark Land Day.
The day of activities was organized by The Popular Committee Against the Wall and Settlements in Beit Sahour. 150 olive trees were planted at lands in an area locals call Ush Ghrab. The Joint Advocacy Imitative at the YMCA provided the trees.

Over 300 Palestinian women and their children were invited by the General Union of Palestinian Women for a day of entertainment and lunch but also education and participation. Dozens of these women joined the tree planting activity. A delegation from the Palestinian Ministry of Agriculture also participated in the actions.

The Israeli military recently installed a watch tower in the area. During the activities of Land Day, the military jeeps drove by the peace park in an attempt to provoke but left after 2 hours.

The Popular Committee Against the Wall and Settlements in Beit Sahour screened movies and delivered a presentation for groups before and after the tree planting talking about the situation in Ush Ghrab and the significance of this day in Palestinian history.

The Israeli army abandoned the military base at Ush Ghrab in April 2006, and part of the site was transformed by the local people into a children and public park.
The municipality of Beit Sahour has been prevented, by the army, from converting the rest of the area into a children’s hospital serving all of the southern West Bank. Two years ago settlers announced that they were planning to erect a settlement at Ush Ghrab, to be called Shdema.

In the ensuing confrontations at the time with the Israeli army and police, six Palestinians were killed, about one hundred were wounded, and hundreds of others arrested by the Israeli police. Today, Land Day is an important annual day of commemoration in the Palestinian national political calendar, it is marked not only by Palestinian- citizens of Israel, but by Palestinians all over the world and their supporters.