Palestinian Wounded By Settlers In Hebron 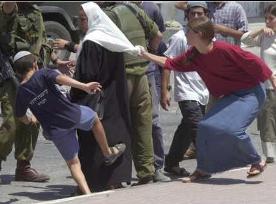 Palestinian medical sources reported on Tuesday evening that a resident suffered concussions and bruises after being violently attacked by extremist Jewish settlers in Hebron city, in the southern part of the West Bank.The sources identified the wounded resident as Atiyya Yousef Masouda, 31. He was attacked by a group of Jewish settlers near the Ibrahimi Mosque.

Palestinian medics arrived at the scene and moved him to the Hebron Governmental Hospital for treatment.

Settlers in Hebron carry ongoing attacks and violations against the residents and their property, while Israeli soldiers, heavily deployed in the area, do not attempt to intervene.

The attacks target the residents, their homes, property and their lands.

In numerous incidents, school children were attacked by fundamentalist settlers who also attempt to prevent them from reaching their schools.