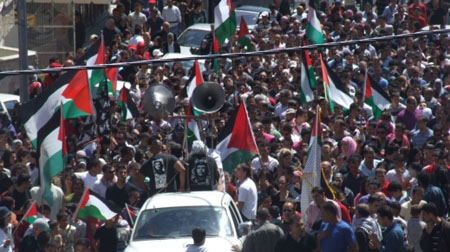 Thousands of Arabs residents, peace activists, held protests on Tuesday commemorating the 34th anniversary of Land Day in Sakhneen and several Arab villages and towns, north of the country. The protestors placed roses on the graves of residents killed by the Israeli army and police.

The main activity was held in Sakhneen; chanting “Long Live Land Day”, “No to the Occupation”, “We will not surrender, we will not bow”, and other chants calling for national unity and steadfastness among all Arabs and Palestinians, the Arabs48 news website reported

At the end of the protest, Sakhneen Mayor, Mazin Ghanayim, said that the Palestinians are facing numerous challenges as the occupation is conducting ongoing violations against the Al Aqsa Mosque in Jerusalem, and ongoing attacks against Arab villages and towns.

Mohammad Zeidan, head of the Higher Follow-up Committee, said that the Arabs in the country are marching today to mark Land Day, and will march to mark the Nakba despite Israel’s illegal laws to forbid the residents from marking the Nakba, the day when Israel was created on their lands and on the ruins of their villages and towns.

Awad Abdul-Fattah, secretary-general of the National Democratic Assembly, said that the huge numbers of participants in this protest reflect the fact that Arabs and Palestinians in the country are fed up with the ongoing Israeli violations, and the ongoing attacks against their brothers in the Palestinian territories.

He added that the protestors took off to the streets to tell Israel that they will remain steadfast, and will resist the Zionist and Racist agendas that aim at wiping out the Arab and Palestinian identity in the country.

Member of Knesset, Jamal Zahalka, said that the participation of thousands of residents is a proof that the people will defend their land and will continue to counter racism and discrimination.

Zahalka added that Israel already annexed more than %80 of the Arab lands and gave them to the Jews who immigrated to the country and replaced the indigenous Palestinian people.

“Our struggle today is not only to defend what is left of our land”, Zahalka said, “Our struggle is to gain back the lands that were stolen from us by racist laws, laws of theft and robbery”.

He added that as the Palestinians mark Land Day this year, Israel is ongoing with its violations and is escalating its attacks and violations against Jerusalem, its Arab and Muslim Holy sites, against the residents and their homes.

“the fact is we are not only facing racism from Israel”, Zahalka added, “We are facing a policy that considers every Palestinian, every Arab, as an enemy, as an outsider that has no rights at all”.

Since that day, Land Day is marked by Palestinians living within Israel, in the occupied territories, and in Diaspora to express steadfastness and determination to continue the struggle against occupation, racism and oppression.

Thousands also held protests in the Negev and other parts of the countries and chanted against Israel’s illegal policies against the Arabs in the country.

They also protested Israel’s illegal policies that prevents the Arabs from marking their national days, such as the Nakba day when Israel was created on their lands and homes by terrorizing the people out of their lands and conducting massacres against them, the Arabs48 added. 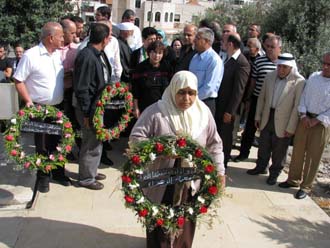