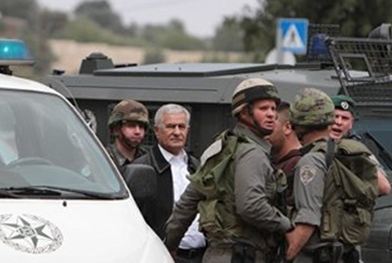 Member of the Fateh’s Central Committee, Abbas Zaki, reported that senior European official, representatives of the French and Spanish Consulates, will be attending his trial which will be held at an Israeli Court in Jerusalem on Wednesday.The office of Zaki issued a press release demanding Israel to release him without preconditions, and stated that a massive protest will take place Wednesday at 11 a.m. in front of the Ofer Israeli Prison.

Palestinian leaders, members and representatives of different factions will also be attending the protest demanding the immediate release of Zaki.

Spokesperson of the French Foreign Minister demanded Israel to release Zaki who was kidnapped by the soldiers during a nonviolent protest, as hundreds of residents protested on Palm Sunday demanding Israel to grant freedom of movement to all worshipers.

The soldiers kidnapped ten other residents during a similar protest in Bethlehem last Sunday.

The Israeli Court in Jerusalem decided to keep Zaki imprisoned for further interrogation. He was later moved to Ofer prison near the central West Bank city of Ramallah.