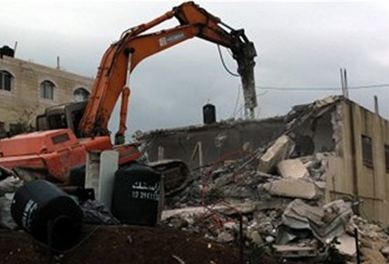 Fakhri Abu Diab, member of a local committee that’s active in defending Palestinian homes in Silwan, stated that the resumption of home demolition in Jerusalem proves that Israel does not care about the international law, and is ignoring calls by the UN, the United States and several other countries to stop these violations.

Abu Diab added that Israel is escalating its illegal settlement activities while at the same time is trying to force the Palestinians out of the city.

He demanded the Palestinian Authority of Mahmoud Abbas to halt all talks with Israel, and to act on the international level to impose sanctions on Israel and oblige it to stop its violations in Jerusalem and the rest of Palestine.

Ziad Al Hammoury, head of the Jerusalem Center for Social and Economic Rights (JCSER) stated that Israel halted the demolishing of homes in the past few months due to technical issues regarding financing the demolishing and providing protection to municipality workers.

Al Hammoury added that Israel is acting on forcing the Palestinians out of Jerusalem by demolishing their homes and imposing restrictions of them, and now the Israeli government issued a decision to expel thousands of Palestinian from the West Bank.

“This is all part of the Israeli demographic plan”, he stated, “they want to force the Palestinians out and replace them with Jewish settlers, that’s why they are building thousands of units for Jewish settlers while demolishing Palestinian homes and expelling the residents out of their homeland”.

On October of 2009, the Israeli government halted the demolishing of homes due to external pressures as the issue brought international attention, yet not sufficient to force Israel to comply by the international law.

But should the Israeli police adhere to the demands of Jerusalem mayor, the demolishing would restart in the coming few days.

It is worth mentioning that the Planning and Construction Department at the Jerusalem Municipality is planning to approve a construction plan to built more homes in Gilo illegal settlement.

The Construction Department will hold a meeting this coming Thursday and will likely approve a plan to annex more Palestinian lands to the Gilo settlement in order to use those lands for the construction of public facilities.