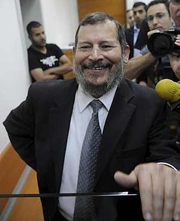 The Israeli police arrested on Wednesday former Jerusalem mayor, Uri Lupolianski, on suspicions of corruption, bribery, and money laundering. He will remain in custody for 5 days pending further investigation. The Israeli police believes that Lupolianski is involved in the new corruption case known as “Holy Land” along with former Israeli Prime Minister, Ehud Olmert.

Lupolianski still denies any involvement in corruption or bribery. He is believed to have taken money to change planning laws in order to allow the construction of large, not well designed, apartment blocks in Jerusalem.

He is currently under interrogation on suspicion of conspiracy, breach of trust, taking bribes, fraud, and tax offenses.

The police sated that tens of millions were paid to senior officials at the Jerusalem municipality in order to push for the approval of the “Holy Land” project.

Previously, the police arrested attorney Uri Maysor on involvement that he bribed a senior official at the Jerusalem municipality. The name of the official who received the bribe remained classified. The issue took place when Olmert was the mayor of Jerusalem.

The Israeli police is accusing Lupolianski of receiving some 500.000 New Israeli Shekels until the year 1999, and some 1.4 Million and 30.000 USD between the years of 2000 and 2006. The money was used to pay for political activists who ran the municipality elections campaign in 2003.