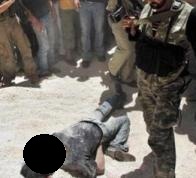 The dissolved Hamas-led government in the Gaza Strip officially announced on Thursday morning that it executed two Palestinians convicted of collaborating with the Israeli Intelligence. The two were shot to death.General Ahmad Attalla, head of the Military Prosecution in Gaza, confirmed that the two were executed after all appeals and legal measures were fulfilled.

The Military Court in Gaza sentenced the two residents to death on February 22, 2009.

The Palestinian Information Center, affiliated with Hamas identified the two as Nasser Salama Abu Freih, a police officer from Izbit Abed-Rabbo in the Jabalia refugee camp, and Mohammad Ahmad Al Sabe’, were convicted of collaborating with “hostile entities, murder and accessory to murder.

The Al Mezan center for Human Rights, based in Gaza, confirmed that the two were executed and that their bodies were moved to the Al Shifa Hospital in Gaza City.

Interior Minister of the Dissolved Hamas government in Gaza, Fathi Hammad, recently declared the Ministry’s intention to executed the two and added that they are involved in the killing of two civilians and two resistance fighters.

Although the Palestinian Law requires the written and signed approval from the president before any execution is conducted, yet the Gaza government did not receive an authorization from president Mahmoud Abbas of the rival Fateh movement due to ongoing rift between the two movements.