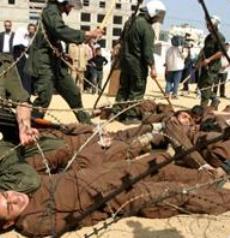 As the Palestinians mark the Palestinian Prisoners Day on Saturday March 17, at least 8500 detainees, including women and children, and several legislators and officials, are still imprisoned by Israel in several prisons, interrogation centers and camps. The Palestinian Center for Defending the Detainees and Human Rights issued a press release on Friday stating that Israel is still imprisoning and violating the basic rights of approximately 8500 detainees including 340 children, 37 women and 1600 detainees who need urgent medical attention.

This number also includes elected Palestinian officials, legislators and ministers.
The Center added that the number of detainees who died in Israeli prisons due to torture and medical negligence arrived to 196 detainees.

There are 340 children imprisoned by Israel and deprived of their basic rights according to all international regulations and the Fourth Geneva Conventions.

The Center stated that 16 legislators, including 13 affiliated with Hamas, 2 with Fateh, and the Secretary-General of the Popular Front for the Liberation of Palestine, Ahmad Saadat, in addition to former Minister of Detainees, Wasfy Qabha, and Fateh leader, Marwan Barghouthi, are still imprisoned by Israel.

There are 37 women who are still imprisoned by Israel and 320 detainees who have been imprisoned since more than 25 years.

The Center called on Palestinian institutions, Arab, regional and international human rights groups to practice utmost pressure on Israel to end its violations against the detainees and their families.

He needed urgent health care but the prison administration decided to keep him in solitary confinement instead of moving him to a hospital.

There are several detainees who died of their wounds as they were shot and wounded by the army and were deprived from receiving the critically needed medical attention.