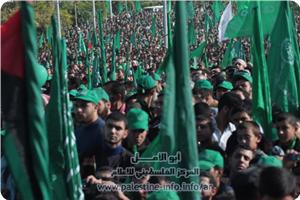 The Hamas and Islamic Jihad Movements organized on Thursday massive processions in the Gaza Strip in solidarity with the Palestinian detainees imprisoned by Israel, and against Israel’s decision to deport Palestinians, and detainees, from the West Bank. Several Palestinian Legislators and Hamas leaders participated in the procession while the residents chanted in support to the detainees and calling for abducting Israeli soldiers to trade them with Palestinian detainees.

Saber Abu Karsh, head of the Waed Society For Detainees And Liberated, called on the Palestinian institutions to participate in commemorating the Palestinian Prisoners Day on April 17.

In Khan Younis, in the southern part of the Gaza Strip, the Islamic Jihad Movement organized a protest against the deportation orders and in solidarity with the Palestinian detainees.

Dr. Mohammad Al Hindi, one of the political leaders of the Islamic Jihad, stated that the Prisoners Day should be the day of National Unity and Palestinian Reconciliation.

Al Hindi added that Israel’s political and ideological priority is not to reach a peace settlement, but to ethnically cleanse the Palestinian and Arabs from Jerusalem and the rest of Palestine.

Hamas leader, Ismail Radwan, stated that the Palestinians will counter the illegal Israeli decisions and violations with popular resistance and armed struggle.

His statements were made as Hamas was marking the sixth anniversary of the assassination of Dr. Abdul-Aziz Rantissi.