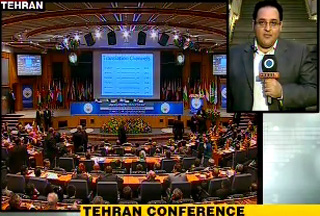 Iran has officially started, Saturday, its summit on nuclear disarmament and non-proliferation of atomic weapons, the Iranian Press TV reported. The conference will last for two days while the participants will be discussing the issue of nuclear power and disarmament. Experts from 70 different countries will be participating in the conference dubbed “Nuclear Energy for All, Nuclear Weapon for No One”.

Press TV stated that the main goal of the conference is to raise international awareness on the issue.

Tehran wants to draw international attention to the issue of main world powers that are stockpiling nuclear weapons, and the threats this issue poses on the international level.

It also wants to indicate that the International Atomic Energy Agency has unbalanced standards in dealing with different countries that have nuclear power, mainly Israel and the United States.

Iran also intends to make the point that all countries must be able to obtain “clean and peaceful nuclear energy”, the Press TV added.

Egypt will be participating in the summit despite its strong diplomatic ties with Israel and the United States. Egypt’s relations with Iran has been severed since 1979 but the county is participating by sending diplomats.

The main document of the summit states that the International Community had failed in creating a nuclear-free zone in the Middle East as Israel is refusing to sign any treaty in this regard.

The French Foreign Ministry slammed the Iranian decision to resume the enrichment of Uranium, and added that instead of having a real and direct dialogue all efforts seem to be roaming in the same monologue.