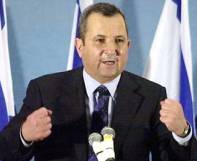 Israeli Defense Minister, Ehud Barak, stated Monday that, at the current stage, Iran does not pose any threat to the existence of the state of Israel, and added that should it obtain nuclear weapons, it would lead the region to step-up the nuclear race.Speaking to the Israeli Radio, Barak called for preventing Iran from obtaining nuclear weapons, and added that “now is the right time to impose comprehensive sanctions on Iran”, and to give the United States a chance to stop the “Iranian Nuclear agenda”.

As for the stalled Palestinian-Israeli talks, Barak said that the solution to the current crisis requires “courage” from Israel, and that this courage would lead the two sides to reach a deal without the intervention of a third party.

He added that the issue of borders is one of the main issues, and requires “painful concessions”, but also held the Palestinians responsible for any failure of a two-state solution.

Israel refuses to hold talks on main issues such as Jerusalem, borders, natural resources, the refugees and settlements.