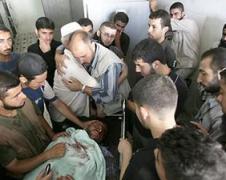 Palestinian medical sources reported that the two fighters who were killed in an explosion in Gaza on Saturday evening, have been identified.The two were identified as Ayman Abu Khousa and Naji Al Nabaheen, both in their twenties.

The explosion took place at a home east of the Al Boreij refugee camp, in central Gaza.

The Israeli army issued a statement denying any involvement in the explosion, and stated that the soldiers did not carry any operation in the area on Saturday.

Palestinian medical sources in the Gaza Strip reported that two fighters were killed on Saturday evening in an explosion that took place east of the Al Boreij refugee camp, in central Gaza.

Medics and rescue teams evacuated the bodies of two residents and moved them to the Al Aqsa Hospital in Dir Al Balah.

The two were not identified until the time of this report. The Palestinian Security Forces opened an investigation into the issue.

Also on Saturday, Israeli soldiers fired a shell at a border area in Gaza.