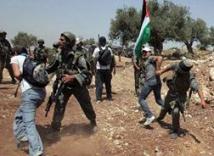 Israeli settlers escalated their attacks against the residents and their lands in the Hebron area and several parts of the occupied West Bank, while Israeli soldiers failed to stop these attacks, and instead attacked Palestinians and peace activists.

Soldiers also obstructed a peaceful protests against settlements and against sealing the entrances of the village.

Soldiers also attacked several worshipers near the village’s mosque and fired dozens of gas bombs at them.

The army closed the main entrance of Beit Ummar three days ago, and is preventing and vehicles from entering or leaving the town.