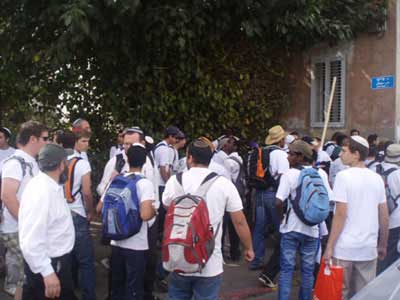 The Arabs48 news Website reported Tuesday that a group of fundamentalist settlers of Keryat Arba’ Yeshiva in Jaffa broke on Sunday into an Arab home in the city and attacked its owner telling her that they “will force all Arabs out of Jaffa”. The settlers struck Zeinab Raheel, and told her that the Arab presence in Jaffa is “temporary”, and that all Arabs will be forced out of “Israel”.

They later held prayers in front of the house carrying Israeli flags and chanting racist slogans against the Arabs and Palestinians.

The attack is one of many recent attacks in Jaffa as the settlers are trying to create at outpost in the center of Al Ajamy neighborhood, the biggest Palestinian neighborhood in the city.

On Monday evening, several residents and leaders of Arab movements in the city held a meeting and decided to hold a protest on Wednesday at 2 in the afternoon, in front of the house of Raheel.

Raheel (Um Al Abed), several Arabs leaders in Jaffa, and leaders of the Arab movement in the country will be participating in the meeting to discuss the steps needed to counter the escalated attacks against the Arabs and Palestinians in the country.