Thousands March Towards A Destroyed Arab Village Near Al Teera 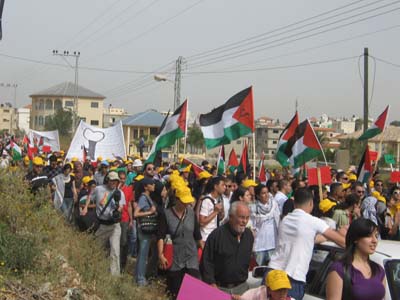 The Palestinians living in the 1948 territories are commemorating the 62nd anniversary of the Nakba when hundreds of thousands of Palestinians and Arabs were displaced, and hundreds of towns and villages were wiped-out during the creation of Israel.

13 years ago, the Arabs and Palestinians in the country decided that their protests to commemorate the Nakba would always be called “Their Independence, Our Nakba”, referring to the creation of Israel in Palestine by displacing the indigenous people and stealing their lands and homes.

The government will not support any local council that;

1. Does not recognize Israel as a Jewish State.
2. Incites “racism”, “Violence” and “Terrorism”.
3. Supports armed struggle, armed activities and supports groups or countries that fight Israel.
4. Marks the “Israeli Independence” as a Nakba or as a day of mourning.
5. Defaming or sabotaging Israel’s flag and its symbol.

Arab Legislator, Dr. Jamal Zahalka of the National Democratic Assembly, stated that the Arabs will not abandon their Right of Return, and will never forget or forgive those responsible for the crime of the Nakba, the displacement or the natives, the occupation and racism.

He told the Arabs48 that while Israel celebrates the so-called independence, the world must know that using the word “independence” is a big lie.

He added that the Israeli law that prohibits the commemoration of the Nakba is a racist law, and that the Arabs will challenge it and will oppose it.

“This is a racist law, another proof of the ideological and moral Zionist bankruptcy, any law that forbids the residents from commemorating their suffering, and from expressing their grief, is a racist law”, Zahalka stated, “This law, and several other similar racist laws, proof that Israel cannot and will not be able to void the history of the indigenous Palestinians; this is our land, our history and they will never be able to uproot us”.