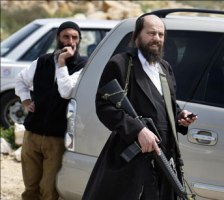 Israeli sources reported that a group of settlers of the Yitzhar illegal settlement, attacked several soldiers and lightly wounded one soldiers on Thursday evening, and also hurled stones at military jeeps and slashed the tires of an army vehicle.The settlers were on their way to attack a Palestinian village, south of the northern West Bank city of Nablus, and the army arrived at the scene in an attempt to stop them. The settlers then clashes with the soldiers and attacked them.

The army said that this violence will not be tolerated especially while Israel is celebrating its “independence day”.

An army spokesperson stated that the settlers crossed a red line, and that this issues will be handled according to the law.

The Israeli police arrested a settler youth after he slashed the tires of a military jeep during the clashes, and moved him for questioning.

The settlers claim that the army started the violence by preventing them from entering the area and that “a soldier even opened fired without being in danger”.

Also on Tuesday, a group of settlers vandalized a Palestinian vehicle by slashing its tires and destroying is windshield after a Palestinian couple accidentally entered an illegal settlement outpost and farm.

Rabbis for Human Rights organization warned that the settlers are escalating their attacks and demanded the Israeli army to provide immediate protection to the Palestinian villages.