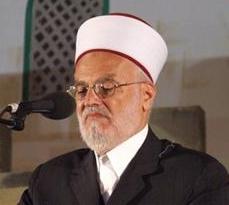 Israeli Interior Minister, Elie Yishai, issued a decree on Thursday preventing Sheikh Ikrima Sabri, the Imam of the Al Aqsa Mosque in Jerusalem and head of the Higher Islamic Committee from leaving the country until September 27, 2010.Yishai claimed that Sabri’s travel harms the security of Israel, and accused him of incitement.

He added that the accusations against him as baseless and unjustifiable.

Sheikh Sabri further stated that he usually leaves the country after receiving invitations
to participate in academic and religious seminars that has nothing to due to Israel’s security.

He said that he would appeal the decision in an attempt to void it.

Sheikh Sabri is still unable to enter the Al Aqsa Mosque in Jerusalem due to an Israeli military decision issued against him six months ago.