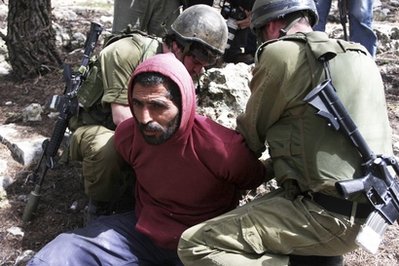 In the West Bank, two Palestinian civilians, including a child, were wounded by Israeli forces in al-Far’a refugee camp, south of Tubas, and in Beit Ummar village, north of Hebron.

Israeli forces have continued to impose severe restrictions on the movement of Palestinian civilians. In just one example, during the reporting period, Israeli troops stationed at B-56 checkpoint at the northern entrance of al-Shuhada Street imposed additional restrictions on the movement of Palestinian civilians. They conducted prolonged checks on civilians. On Saturday, 17 April 2010, Israeli forces imposed a tightened closure on Beit Ummar village, north of Hebron. They prevented international solidarity activists from entering the village.

At approximately 15:00 on Thursday, 15 April 2010, Israeli troops stationed at Hawwara checkpoint, south of Nablus, abducted 3 Palestinians from al-Far’a refugee camp south of Tubas, who were passing through the checkpoint

On 16 April 2010, a member of the Palestinian resistance was killed in the Gaza Strip during armed clashes with Israeli troops that moved into al-Shoja’eya neighborhood in the east of Gaza City.

On 20 April 2010, a Palestinian worker was wounded when Israeli troops fired at a number of workers who were collecting bricks and construction aggregate in the northern Gaza Strip.

On 20 April 2010, Israeli gunboats fired at Palestinian fishing boats in the northern Gaza Strip. No casualties were reported.

On the same day, Israeli forces fired at a number of Palestinian civilians and international solidarity activists who organized a peaceful protest against the establishment of a buffer zone along the border between the Gaza Strip and Israel. No casualties were reported.

Israel had continued to close Beit Hanoun (Erez) crossing to Palestinian civilians wishing to travel to the West Bank and Israeli for medical treatment, trade or social visits.

Living conditions of the Palestinian civilian population have seriously deteriorated; levels of poverty and unemployment have mounted sharply.

Israel has continued its settlement activities in the West Bank and Israeli settlers have continued to attack Palestinian civilians and property.

On 15 April 2010, Israeli forces delivered notices to a number of Palestinian families in the Tal al-Rumaida neighborhood in central Hebron, announcing the seizure of 5 tracts of land near their houses, supposedly out of security considerations. The area of land, a total of 7 donums, belongs to the heirs of Mahmoud Khamis al-Saheb.

On Wednesday, 21 April 2010, a number of Israeli settlers from ‘Ariel’ settlement near Salfit threw stones at Palestinian civilian vehicles near Kufor Hares village, north of Salfit. No injuries were reported.

Israeli forces used excessive force against peaceful protests organized by Palestinian civilians and international and Israeli human rights defenders against the construction of the Annexation Wall and settlement activities in the West Bank.

On Friday, 16 April 2010, at approximately 02:00, Israeli forces moved into al-Ma’sara village, south of Bethlehem. They raided and searched a house belonging to Mohammed Ahmed Braijiya, Coordinator of the Popular Committee against the Wall and Settlements in Bethlehem. They threatened to arrest him in case he continued organizing peaceful protests against the wall and settlement activities.

Following the Friday Prayer on 16 April 2010, dozens of Palestinian civilians and international and Israeli human rights defenders organized a peaceful demonstration in protest of the construction of the Annexation Wall in Bil’ein village, west of Ramallah. The demonstrators moved towards the Wall and attempted to to access annexed lands behind it. Immediately, Israeli troops fired rubber-coated metal bullets, sound bombs and tear gas canisters at the demonstrators. As a result, dozens of demonstrators suffered from tear gas inhalation, and some of them sustained bruises.

Also following the Friday Prayer on 16 April 2010, dozens of Palestinian civilians and international and human rights defenders organized a peaceful demonstration in Ne’lin village, west of Ramallah, in protest of the construction of the Annexation Wall. They clashed with Israeli forces troops positioned near the Wall. Israeli forces troops fired rubber-coated metal bullets, sound bombs and tear gas canisters at demonstrators. Dozens of demonstrators suffered from tear gas inhalation, and other sustained bruises.

Also following the Friday Prayer on 09 April 2010, dozens of Palestinian civilians and international and Israeli human rights defenders organized a peaceful demonstration in Nabil Saleh village, northwest of Ramallah, protesting against land confiscation in the Wad al-Raya area between the villages of Nabi Saleh and Deir Nizam. When the demonstrators attempted to reach land seized by Israeli settlers near ‘Halmish’ settlement, Israeli troops fired rubber-coated metal bullets, sound bombs and tear gas canisters at them. As a result, dozens of demonstrators also suffered from tear gas inhalation, and other sustained bruises.

Due to the number and severity of Israeli human rights violations this week, the Palestinian Center for Human Rights made a number of recommendations to the international community. Among these were a recommendation for the immediate implementation of the Advisory Opinion issued by the International Court of Justice, which considers the construction of the Annexation Wall inside the West Bank illegal.

The PCHR recommends that international civil society organizations, including human rights organizations, bar associations and NGOs, participate in the process of exposing those accused of grave breaches of international law and urge their governments to bring the perpetrators to justice.