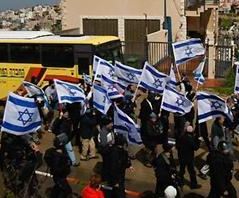 Palestinian medical sources reported Sunday that at least five Palestinians, including a medic, were wounded by rubber-coated bullets fired by the Israeli army at protestors in Al Bustan neighborhood in Silwan town, in East Jerusalem. Dozens of protestors closed the entrances Silwan with stones and tires while the police and undercover forces attacked them.

Most of the clashes are concentrated near the protest tent installed by the residents against settlements and the illegal takeover of Palestinian homes and buildings in Jerusalem.

Dozens of fundamentalist Jewish settlers are planning to march in Silwan on Sunday while the police decided to allow them to hold their protest.

The settlers are calling for the expulsion of the Palestinians from the neighborhood and from East Jerusalem.

The police sealed the entrances of Silwan while hundreds of officers were deployed in the area.

Israeli online daily, Haaretz, reported that nearly 50 settlers marched to the center of Silwan to protest what they described as “illegal Palestinian constructions”.

The settlers are headed by extreme fundamentalists Itamar Ben Gvir and Baruch Marzel,

Haaretz said that Israeli Prime Minister requested on Saturday night that the march be postponed but his request was rejected by the Israeli Attorney General who claimed that there are no legal grounds to prevent the protest.